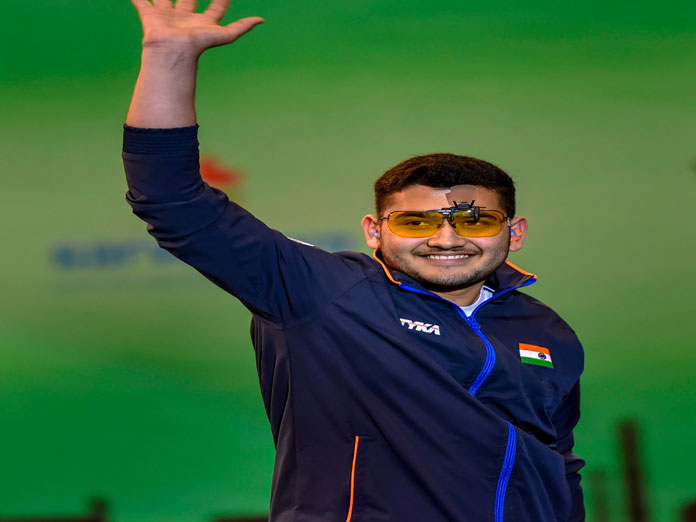 Anish Bhanwala could not make up for Manu Bhaker and Heena Sidhus failure to reach the womens 10m air pistol final, finishing fifth in his event on a lacklustre day for India in the ISSF World Cup here on Tuesday Anish, who was placed fifth in the qualification too, shot a total of 14 to finish outside the podium in the sixman final of the mens 25m rapid fire pistol competition

New Delhi: Anish Bhanwala could not make up for Manu Bhaker and Heena Sidhu’s failure to reach the women’s 10m air pistol final, finishing fifth in his event on a lacklustre day for India in the ISSF World Cup here on Tuesday. Anish, who was placed fifth in the qualification too, shot a total of 14 to finish outside the podium in the six-man final of the men’s 25m rapid fire pistol competition.

The event started 20 minutes late due to a technical snag in one of the targets. The International Shooting Federation (ISSF) has offered to reimburse all the expenses of the winner and runners-up in this event since its Olympic quota status was withdrawn after Pakistani shooters were denied visa in the wake of the Pulwama terror attack.

Gaayathri Nityanadam and Sunidhi Chauhan also failed to qualify for the final in the 50m rifle 3 positions at the Dr Karni Singh Shooting Range. Hoping to make up for her meltdown in the 25m pistol final, the 17-year-old Bhaker was in for more disappointment, finishing a lowly 14th with 573 in the qualifications.

The more experienced Heena Sidhu suffered a similar fate and was placed 25th with 571. Shooting in her maiden World Cup, Anuradha, employed with the Indian Navy, was 22nd with 571. Hungary’s Veronika Major (245.1) won the gold medal in women’s 10am air pistol ahead of Taipei’s Chia Ying Wu (238.4) and Korean Bomi Kim (218.3).

In the day’s other event, the women’s 50m rifle positions, India’s Nityanadam was 36th with 1163, while Chauhan was 49th with 1156. Nina Christen, from Switzerland, won the 50m rifle 3 positions event with a score of 457.1 points, beating silver medallist Shi Mengyao of China, and Kazakhstan’s bronze winner Yelizaveta Korol.

In the day’s last final, men’s 25m rapid fire pistol, Olympic champion Christian Reitz of Germany claimed the gold medal with 35, shooting a perfect 5 four times out of the six series. China’s world champion and world number one Junmin Lin claimed the silver after scoring 31, while the bronze went to Korea’s Junhong Kim (22). Anish, the youngest Indian to win a Commonwealth Games gold, started with 3 each in the first two series before hitting all the targets in the third series.

However, four misses in the next series pulled him down and it became an uphill task for him from thereon. The 16-year-old survived a shoot-off with France’s Clement Bessaguet, but a 3 in the next series was not enough to keep him in the hunt. The two Olympic quota places went to Switzerland and the China. With Wednesday’s mixed events not offering Olympic quota places, hosts India will have to be content with only one 2020 Tokyo Games berth from the tournament.

They will now have to wait until the next World Cup to secure quotas. When asked what went wrong, Heena said she got too engrossed with the tournament since it was being held at home.
“I think last one and half months we have been thinking so much about this match, I think most of the people got too emotionally involved. It played on our minds,” Heena said. “I got too engrossed while trying too hard instead of just sticking to the process,” she explained.