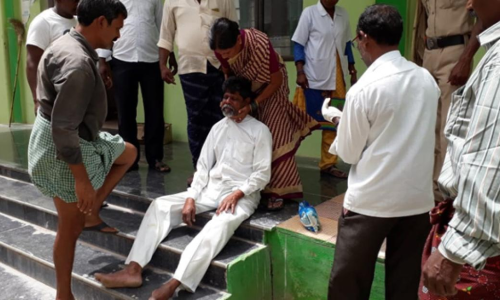 Nagarkurnool: A man vexed with the indifferent attitude of Mandal Revenue Officials (MRO) of Veepanagandla mandal attempted to commit suicide by consuming pesticide in front of Tahsildar office on Thursday.

The local people on seeing the man consuming pesticide shifted him to hospital. Going into the details, Gaddimeedi Gopal, a former Naxalite, had earlier possessed 1.6 acre and 0.27 acre of agriculture land in survey number 441under Veepanagandla mandal in Wanaparthy district.

Revenue officials said the land was sold to Gopal’s sisister way back in 1992. It is still in possession of Gopal’s sister. “Gopal had sold the land in 1992 to his elder sister through an informal letter of land transfer agreement between them.

However, now Gopal is trying to mislead the officials and wants the land to be transferred to his name in the revenue records. But this is not possible, because we have already entered the names of the current landholders as they have shown the proofs of transactions So as per the recent land records purification drive under Sadabinama under part B we have registered the names of the current landowners,” said revenue officials.

In fact the officials were also vexed up with the attitude of Gopal as he was pressuring the officials to enter his name in the RoR irrespective of the possession of the land.