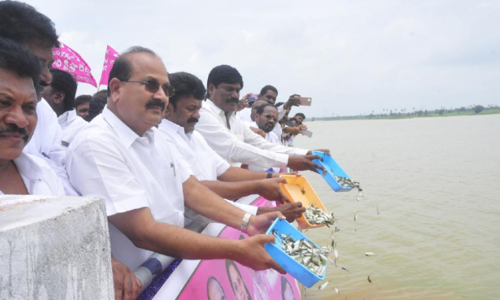 He said that the government had so far distributed 70 lakh sheep to 300 lakh members of Golla and Kuruma community under subsidised sheep distribution scheme to end their migration to other areas in search of livelihood and improve their financial condition.

“The sheep scheme is proving to be a major success. In last one-and-a-half-year, the beneficiaries improved their asset base by adding another 35 lakh sheep through reproduction,” Yadav said. Referring to the Pragathi Nivedana Sabha to be held at Kongara Kalan on September 2, he said that Chief Minister K Chandrashekar Rao will herald the TRS government’s achievements that no other establishment had succeeded.

The government, which is also giving fillip to fishermen community, is releasing 81 crore fingerlings in tanks. This apart, the government is targeting distribution of 2.13 lakh milch cattle to farmers for their economic empowerment.

“There are some forces that are trying to undermine the achievements of the TRS government, however, people are well aware of the kind of development taking place in the State,” Yadav said.

Elsewhere speaking at Narsampet after releasing fingerlings in a tank, Talasani said that justice was only ensured after the formation of Telangana. He said that the government is spending Rs 1,100 crore for the empowerment of Mudiraj community. By next year, the government will establish fishermen societies in all district headquarters.

Civil Supplies Corporation Chairman Peddi Sudarshan Reddy and Whip B Venkateshwarlu were among others who accompanied Minister.