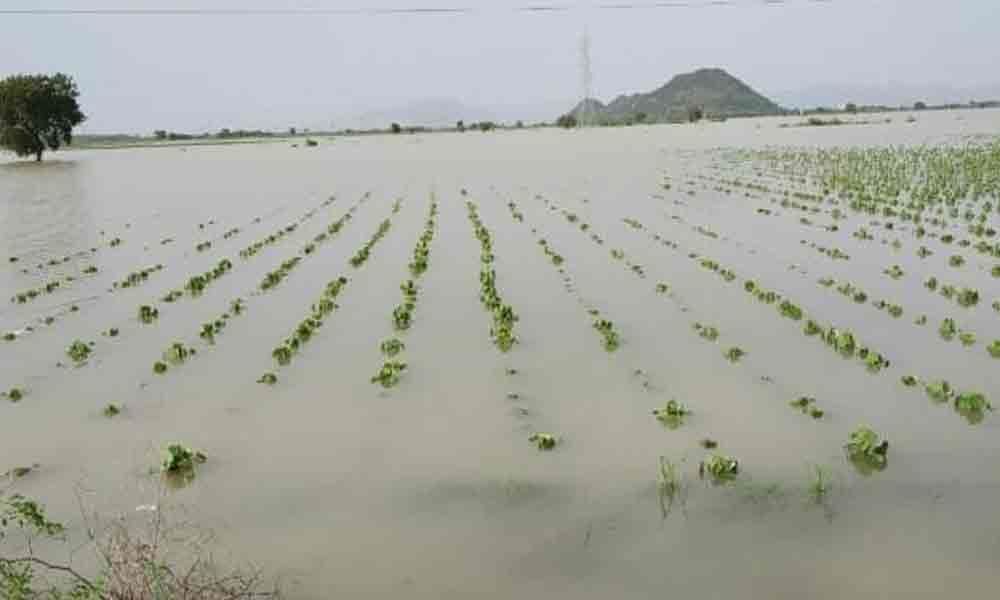 Guntur: Following heavy discharge of floodwater from Pulichintala Project, commercial crops yam, papaya, chillies, turmeric, cotton and maize were inundated in Guntur district. The agriculture fields were found under a sheet of water for the third consecutive day on Sunday.

The district administration has set up 15 relocation camps and shifted 3,782 persons so far. So far 1 lakh food packets were distributed to the flood victims in the district. Officials went to island villages on boats in Kollur and Kollipara mandals of Tenali revenue division.

They engaged boats to rescue people residing in the waterlogged areas and shifted them to safer places.

Road connectivity to Turakapalem, Potarlanka, Pesarlanka, Gajulanka and Juvvvapalem was cut off due to overflowing of floodwater on to the road near Kollur for the last two days causing inconvenience to the people. The farmers whose crops were inundated due to floodwater expressed severe concern over the crop loss.

Meanwhile, Home Minister Mekathoti Sucharita visited the flood-affected villages in Tenali revenue division along with the officials. District Collector I Samuel Anand Kumar explained the steps taken by the district administration to extend an helping hand to the flood victims.

Meanwhile, there is no road connectivity between Vijayawada and Amaravati for the last four days due to overflowing of floodwater at Pedamaddur. Agriculture fields in Pedamaddur were inundated in floodwater.

She urged the victims that they need not worry about assistance from the government.

The Minister asked the officials to distribute food and drinking water packets to the victims and set up medical camps to extend medical services. Later, she consoled flood victims at the relief camps at Kollur and Bhattiprolu mandals.