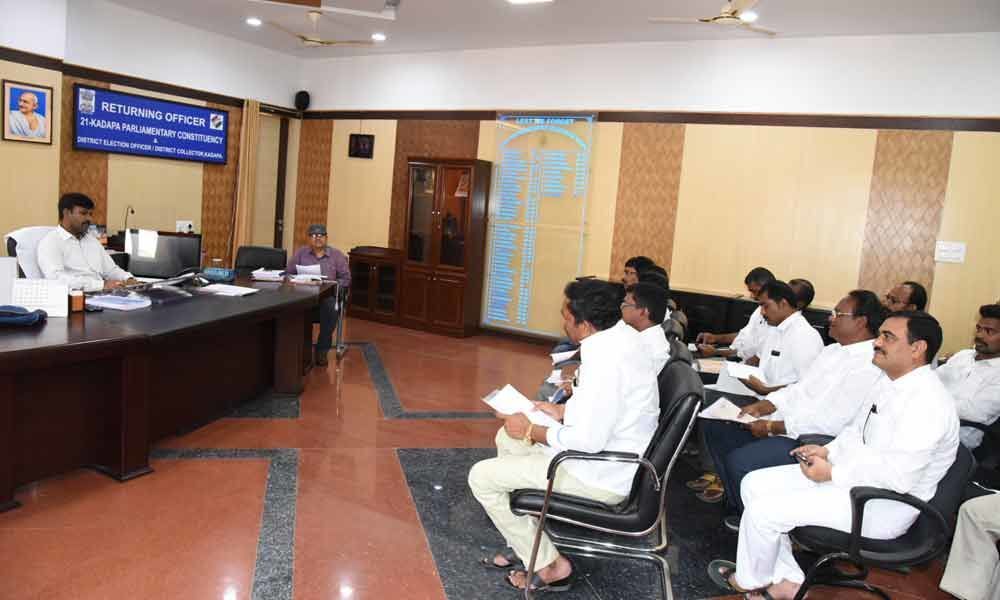 District Collector CH Harikiran has urged the all political parties to extend their support for smooth conduction of counting procedure schedule to be held on 23rd May in the district.

Kadapa: District Collector CH Harikiran has urged the all political parties to extend their support for smooth conduction of counting procedure schedule to be held on 23rd May in the district.

The collector has conducted awareness meeting with the candidates contested for Kadapa Parliamentary constituency, and their party representatives here on Tuesday he said as per the Election Commission of India (ECI) guide lines it was decided to set up total 93 tables including returning officer table for counting Kadapa Loksabha assembly segments like Badvel, Kadapa, Pulivendula, Jammalamadugu, Mydukuru, Kamalapuram, Proddaturu, and related to counting of postal ballots he said total 18 tables would be to arranged in the counting center.

Collector detailed that counting procedure will exactly begins 8AM in the first half an hour counting of postal ballots will be organized and after conclusion of the this procedure, EVM's counting will be taken up by 8.30AM. However collector opined that there may be possibility of taking some delay in counting procedure as it may take 1 hour for completion of three rounds. He said total 112 counting agents were participating in the counting. He directed MP candidates should submit the names of their counting agents including their photographs before 16th May so as ECI issued identification cards for them. He said after conclusion of EVM's, counting of 5 VV Pad's will be organized under lottery system as per the ECI guidelines.