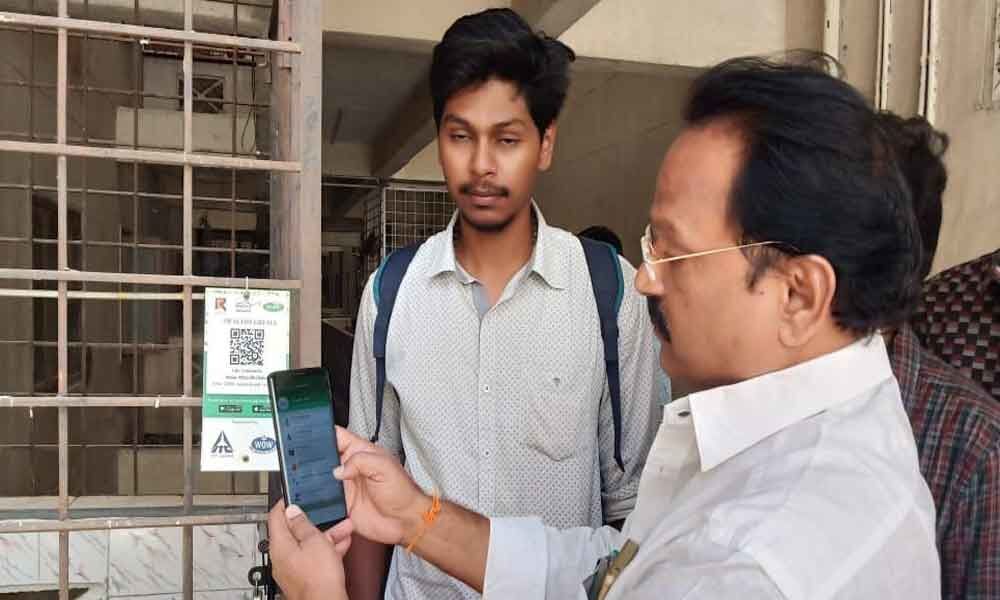 In order to maintain transparency in garbage collection and to make accountable the denizens in general and the collection teams in particular, the GHMC Rajendranagarcircle has come up with a unique and tech-enable idea of stick out a QR Code board at the door side of the houses.

Rajendranagar: In order to maintain transparency in garbage collection and to make accountable the denizens in general and the collection teams in particular, the GHMC Rajendranagarcircle has come up with a unique and tech-enable idea of stick out a QR Code board at the door side of the houses.

GHMC Deputy Commission (Rajendranagar) D Pradeep Kumar launched on Wednesday the implementation of QR Code generation system at Attapur area as a pilot project with the help of especially designed software. The GHMC asked all the garbage collection teams to upload the especially designed app in their smart phones which enables them to read and process the information while collecting the trash going around the room.

The app carries 6 features in all like Segregated, Not Segregated, Door Closed, Refused, Relocated and Cash Received. The members of GCT would make an entry into the mobile by scanning the barcode and as per the situation he or she experienced while collecting the trash.

For instance, if any member of the household handed over the trash without separating the dry and wet waste, the member of GCT will register the folly as 'Not Segregated'. Similarly, if the doors of a house remain closed at the time of trash collection, they could make an entry into the mobile as 'Door Closed'.

More so, if anyone refused to hand over the trash, the member of GCT could register this instance using the option as 'Refused'.This app could also be useful to make a transaction after collecting the monthly fee being charged for garbage collection. The option 'Cash Received' is also incorporated in the app which could be used after receipt of the monthly fee from the households.

After generating all the information, a ward-wise report would be made and send to the Command and Control Centers based at GHMC Rajendranagar and the Head office wherein the report, weekly or monthly, would be analyze and the performance of the GCT on the field would be ascertain.

It is learnt that the entire process of technology-enabled garbage collection system though especially designed software would be supervised and manage by the ITC (WOW) Company under corporate social responsibility.

Though the GHMC Rajedranagar comes up with unique ideas every now and then to stimulate the sense of hygiene among people but all of them were directed towards those areas which were considered as open to civic sense and well maintained.

Recently the GHMC has started sensitising people about the importance of separating of dry and wet garbage at Utopia apartments Hyderguda. Recently it has also organised Mass cleaning Drive at Mailardevpally sensitizing people about the danger of throwing the waste in their surroundings.

"People are still clueless why all the initiatives of GHMC Rajendranagar start from areas which are always considered more privileged, well-maintained and sensible in terms of sanitation. Why those untouched areas like Sulaiman Nagar, Hasan Nagar, Bintirf Colony, ShastripuramApproach Road and Rizwan Colony etc., have been neglected or left in lurch where the issue of sanitation needs more attention than any other areas," said Sadiq Bin Salam, who contested as MLA from Rajendranagar.