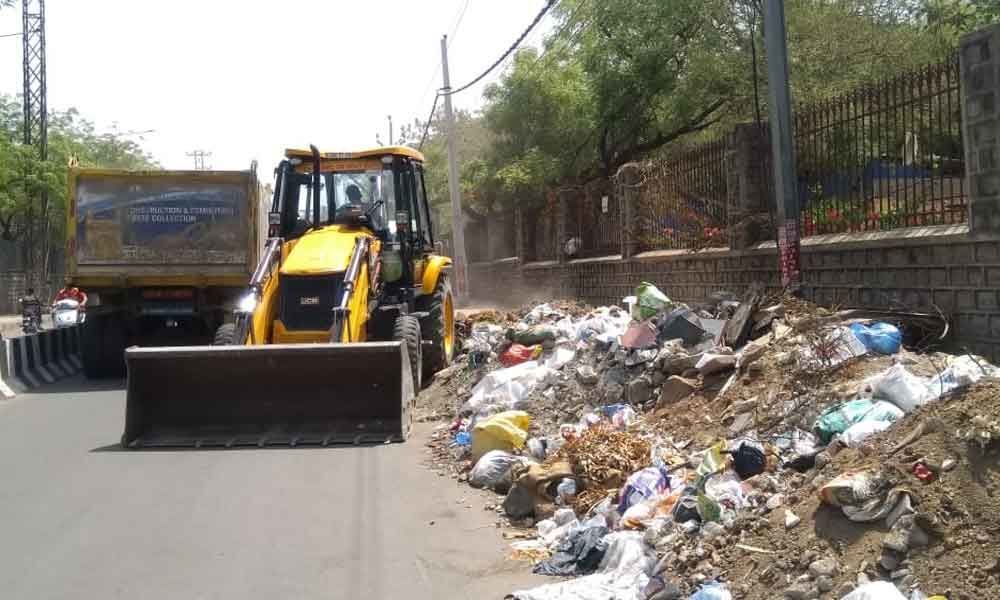 It is clearly visible to the passersby who take the road which connects Santosh Nagar water tank to Edi Bazaar named as CRIDA road. Huge heaps of construction debris along with other wastage including garbage can be seen.

• Although garbage cleared regularly, it is piling up in no time

Santosh Nagar: Most of the boundary wall of CRIDA (Central Research Institute for Dryland Agriculture) located in Santoshnagar has been slowly transformed into dumping yard for waste products, especially by the real estate companies. Even though the trash is being cleared at regular intervals by the civic authorities, the locals have blamed the GHMC for its indifference against those who were indulging in this kind of activity during the night, which amounts to violation of norms.

It is clearly visible to the passersby who take the road which connects Santosh Nagar water tank to Edi Bazaar named as CRIDA road. Huge heaps of construction debris along with other wastage including garbage can be seen.

Almost half of the road has been turned into dumping yard with garbage piling up on the road causing lot of inconvenience to commuters. "The clean area has been now converted into a dumping yard. Every time I pass in day or night, I watch lorries unloading the debris near the boundary wall of CRIDA. The police or the GHMC officials has not taken any action against the practice, said Ayaz Khan, a commuter, while speaking to The Hans India here on Wednesday.

Ayaz also said that the GHMC was cleaning the road at regular intervals once in a week, but again, on the following day, the road is filled with debris. He said that it was not proper to blame the officials every time and locals should also ensure that the surrounding areas were kept clean. "If the garbage is not cleared regularly, it could turn into a breeding ground for insects that too close enough to a national level research centre.

CRIDA is a constituent organisation of Indian Council of Agricultural Research (ICAR), an autonomous body of Ministry of Agriculture, Government of India. The Institute also undertakes national and international collaborations and consultancy projects.

Unfortunately, its boundary wall has been now covered in the background of debris which also spreads pollutants in the air. "Those who are dumping the trash should be identified and the officials should initiate serious action against them for flouting norms," said Mohammed Mujeeb, a resident.

Responding to queries, the officials said that the garbage was dumped by people who were constructing buildings in the surrounding areas. "Regular complaints were given by the CRIDA to GHMC regarding this and once in a week GHMC is cleaning the debris and also pasted a poster not to dump debris, but the situation remains same," said Mohammed Faqruddin, supervisor, sanitation wing of GHMC, Santosh Nagar division.

He also said that the GHMC officials also reported the matter to Santosh Nagar police to initiate action against the dumping of debris near the boundaries of CRIDA. "Last week around 40 truck of debris were lifted and cleared the boundary. But they are dumping the debris again without despite warnings," added the official.