Gidugu Ramamurthy remembered on his Birth Anniversary in Bapatla 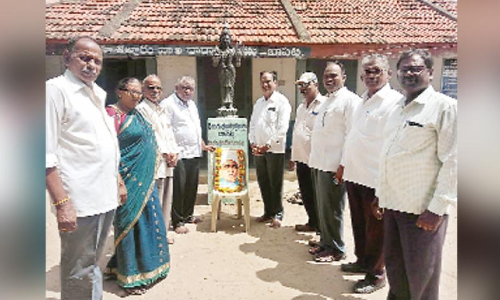 Bapatla: Tahsildar T Vallaiah said that Gidugu Ramamurthy was one of the earliest modern Telugu linguists and social visionaries during the British rule and championed the cause of using the language comprehensible to the common man as opposed to the scholastic language.

Gidugu Ramamurthy's 156th birth anniversary was celebrated on Wednesday under the aegis of Forum for Better Bapatla here. Rich tributes were paid to the great linguist by garlanding his portrait.

He reminded Ramamurthy had studied many languages and comprehended the philosophy of language. He pleaded for lucidity in textbooks. In his time, there was only a poetic approach and not a prosaic treat.