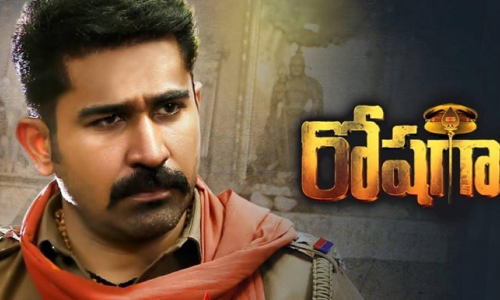 Vijay Antony is like a co address for realistic characterizations and different concepts After delivering such contentbased films like Dr Salim, Bicchagadu etc, Vijay once again came forward to test his luck in Telugu with his latest movie Roshagadu Nivetha Pethuraj who greeted Telugu audience with Mental Madhilo romanced Vijay in the movie

Vijay Antony is like a c/o address for realistic characterizations and different concepts. After delivering such content-based films like 'Dr. Salim', 'Bicchagadu' etc, Vijay once again came forward to test his luck in Telugu with his latest movie 'Roshagadu'. Nivetha Pethuraj who greeted Telugu audience with 'Mental Madhilo' romanced Vijay in the movie. Both the leads appeared in sincere cop roles. Directed by Ganeshaa, the movie finally hit the screens today. Touted to be an action drama, the teasers and trailer of the film has received positive response from the audience. Vijay is hoping to score a decent hit this time. Let's check out the review of the movie.

Story :
Kumara Swamy (Vijay Antony) who works as a Police Constable wanted to make his younger brother Ravi a Police Inspector. But Ravi who don't want to study runs away from home. He joins a rowdy (Babji) and becomes a murderer. Meanwhile, after two years, Kumara Swamy who is still searching for Ravi gets transferred to Hyderabad. He not only finds his younger brother but also learns that Ravi is now a murderer and kills him. Kumara Swamy who is moved to learn that there are so many young people near Babji who became criminals like his brother and decides to bring a change. What happens next forms the crux of the story.

Performances:
Vijay Antony as a sincere cop is simply superb. His matured and outstanding performance is the biggest strength for this film. He actually carried the film on his own shoulders with his energetic performance. His action, especially in the fight scenes, is good. His facial expressions are intense as well as apt. Nivetha Pethuraj looked gorgeous in the film. She justified her Inspector character really well. She also maintained a good chemistry with Vijay Antony which is impressive. Her cheerful and yet serious shades are showcased well in the film. Daniel Balaji has given his best. He delivered an intense and remarkable performance. Lakshmy Ramakrishnan also delivered a neat performance. Sai Dheena also acted really well. Muthuraman did a great job. The rest of the cast also made their presence felt.

Technical Aspects:
The major aim behind the story is to make a point that Police are the real heroes. Ganesha has taken that simple point and penned a powerful script for the film. Though his pace of narration fluctuated a bit, he managed to execute the story well and succeeded in showing the point he wanted to say. Production values of Vijay Antony Film Corporation are super rich and the producer hasn't hesitated in investing the budget. Music by Vijay Antony is also a biggest asset for the film. The title song got a good response and his background score is astounding. Richard M. Nathan is the cinematographer. His camera handling skills are extraordinary as he has produced some good and awesome visuals. The Telugu dubbing is just average. Some dialogues are written well. The runtime is also crisp. The editing is clean.

Verdict:
The film has a different concept and brings juvenile crimes into the limelight. The director dragged the story and made it into a movie. His slow-paced narration might irk the audience sometimes. The first half is decent. With light-weighted comedy and love track, the flow is good. The interval bang is also fine. But the second half is full of action sequences and there is no entertainment. Despite having a good story, it would have been good to present the film in an entertaining manner. The climax is fine. The action sequences will entertain the B and C sections of the audience but for the rest, the movie is boring.