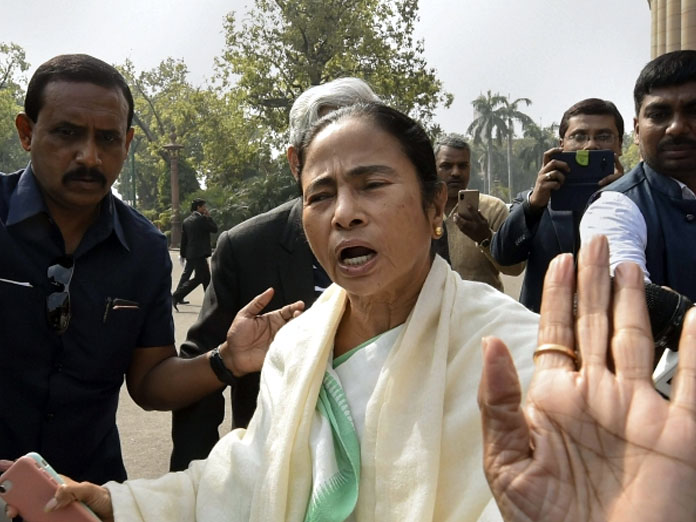 Opposition leaders, including West Bengal Chief Minister Mamata Banerjee, gathered in Delhi on Wednesday for a mega rally organised by Aam Aadmi Party, where they slammed the BJP as a threat to democracy which must be defeated in the coming general election

New Delhi: Opposition leaders, including West Bengal Chief Minister Mamata Banerjee, gathered in Delhi on Wednesday for a mega rally organised by Aam Aadmi Party, where they slammed the BJP as a "threat to democracy" which must be defeated in the coming general election. The rally has been organised nearly three weeks after Banerjee hosted Opposition leaders in Kolkata in a similar show of strength on January 19. Speaking at the rally, CPI leader D Raja said the Constitution is under attack under Narendra Modi as prime minister and asserted that Parliament has been undermined and bypassed and its role has been minimized under Modi.

"Can you allow a Germany-like situation where Hitler overpowered Reichstag(German parliament)," he said. "BJP in power is a threat to constitution and democracy. It must be defeated," he added. Raja asserted that ever since Modi became prime minister, there have been attacks on constitutional values of the country. He said India is defined as a secular, democratic republic while BJP's ideology is "sectarian, communal and divisive". "Whenever fascist powers have tried to capture power, they first destroy democratic institutions.

"And I am not just taking about CBI, RBI... Institution of Parliament being undermined, bypassing Parliament, minimising its role. It is maximum Modi, minimum governance and minimum Parliament," he said. Delhi Chief Minister Arvind Kejriwal and other AAP leaders were present at the rally. Huge posters having the image of B R Ambedkar and slogans like "Tanashahi Hatao Loktantra Bachao" dotted the venue. CPI(M) leader Sitaram Yechury alleged that BJP is professing politics of 'Dushashan' by pitting brothers against brothers. "There is need to replace this government for a better India. This chowkidar needs to be removed to save the country. "BJP is like Kaurava Sena but the Pandavas (Opposition) will defeat them and save the country," he said.

Interestingly, minutes before Mamata Banerjee arrived, the two left leaders moved away from the stage. Other senior leaders including Samajwadi Party's Ram Gopal Yadav, AAP's Sanjay Singh, Nationalist Congress Party's Sharad Pawar and LJD chief Sharad Yadav were also present at the rally. Stressing that the rally organised by Arvind Kejriwal was "historic", former Arunachal Pradesh Chief Minister Gegong Apang said instead of celebrating our diversity, a "minimal, illiberal and monotheistic idea is being imposed". "It is appropriate time to fight autocracy and save democracy.

People are unhappy with the Modi government," he said. He said the central government is also not paying heed to the Citizenship (Amendment) Bill protests in Arunachal Pradesh. "The Centre has a 'Look East' policy but it is against the people of northeast," he alleged and said he has come to Delhi with a "deep sense of anguish". "Mizoram said it will be a different country if this government comes back in power. Arunachal also feels the same. India is a united country and if any government tries to impose CAB in northeast, people will uproot it," he said. Samajawadi party leader Ram Gopal Yadav said Uttar Pradesh will play a crucial role in 2019 and asserted BJP will not open its account in UP, which has 80 Lok Sabha seats.

He said the SP-BSP-RLD alliance will "create a situation" in UP that Modi will have to find another seat, besides Varanasi, to contest the coming Lok Sabha election. This Opposition, he said, will defend the country and save democracy from BJP. "All democratic institutions are under assault," he alleged, adding, "We need to identify the elements, who, in partnership with BJP, are trying to weaken Kejriwal and Mamata governments." DMK Rajya Sabha MP Kanimozhi said she is here on behalf of her party chief Stalin to extend support to Opposition leaders. "This BJP government has to go if economy, farmers, deprived people, freedom of expression is to be protected," she said.