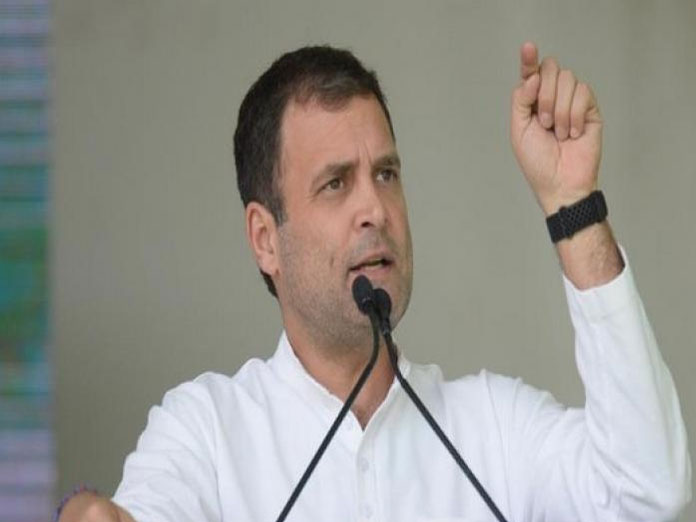 'RSS and BJP spread hate. They wear half pants, wield clubs while we work with love. This is basic difference,' Gandhi said.

Addressing a meeting of the Congress Seva Dal, Gandhi asked Congress men to counter the hatred spread by the BJP and its ideological fountainhead RSS with love.

"RSS and BJP spread hate. They wear half pants, wield clubs while we work with love. This is the basic difference," he said. Gandhi also accused the Rashtriya Swayamsevak Sangh (RSS) of creating unrest in the Northeast.

For Modi, India is a "product" and he wants to divide its benefits among his "15-20 friends", but for the Congress, it is like a sea which has space for all, he said.

"Modi gives tall speeches, says nothing happened (in the country) in the past 70 years. That means Mahatma Gandhi, Sardar (Vallabhbhai) Patel, Jawaharlal Nehru, (B R) Ambedkar and all chief ministers, people of the country, farmers, labours and small traders did nothing. It is an insult of every citizen," Gandhi said.

The erstwhile Congress government introduced rural job guarantee scheme MGNREGA and "we are waiving farmers' loans but Modi makes empty promises to farmers and loans worth Rs 3.5 lakh crore of his friends are written off," he said, while naming fugitive businessman Vijay Mallya and Nirav Modi. The RSS-BJP men hold fear inside them which is reflected in the hatred they spread.

"Hate is another form of fear. There cannot be hate without fear and this is the difference between PM Modi and Me. We (Congress) have no hate because we do not have fear but they (BJP) show hate to conceal their fear and this is about all RSS people," Gandhi said.

The Congress president said when he hugged the prime minister in Parliament, Modi had hate for him.

"Modi says unwarranted things about me, my family and insults the entire Congress party saying that he will finish the Congress party but Congress president hugs him in Parliament. Hate can be defeated only by love. When I hugged him, I had no hate for him but he had hate and I saw on his face. He could not handle that," he said.

Gandhi said that Congress party would defeat the BJP in the coming Lok Sabha elections.

He said that Mahatma Gandhi, Sardar Patel, Subhas Chandra Bose were jailed for years but none of them sought apology from the Britishers whereas V D Savarkar sought apology for nine times because he had fear in him. "Savarkar could not overcome fear therefore hate came out. Gandhiji overcame fear so love came out," he said, while calling upon the Seva Dal workers to spread love and counter hate by love.

Underlining the importance of Seva Dal in Congress party, Gandhi rued that the Seva Dal was not given due respect and place in the party and assured them that the organisation would get its respect from the party president, chief ministers and other office-bearers.

He said that he wants to see "white cap" and uniform of the Seva Dal in every corner of the country. "Wherever there is storm, violence, hatred, I want to see Seva Dal and its love there," he said.