2019 Jaguar XE facelift unveiled, will be available by the end of the year 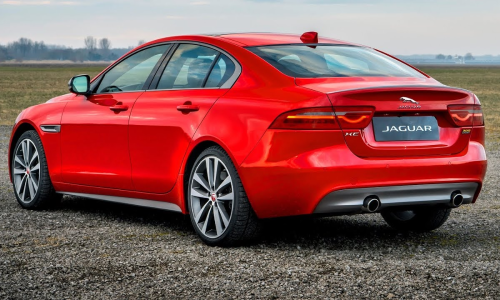 Jaguar has unveiled the 2019 XE sedan facelift. The XE sedan sports a meaner look than the outgoing model. The front fascia features a sleeker headlamp cluster and redesigned bumper for housing larger air intakes. The grille gets a refreshing mesh pattern. The sharp lines assert a more sporty appeal to the XE sedan. A lot of small touches bring the design of the XE facelift to a higher level.

However, the side profile remains untouched. The updated sedan looks identical to the outgoing model. India spec XE sedan will be offered with 18-inch alloy wheels only. The facelift will sit upon retuned suspension. And we can expect the XE to find the balance between comfort and handling.

Jaguar is working hard to take the in-cabin experience to a higher level. The XE sedan will up its ante with more comfort and luxury for all occupants. Attention to detail has been meticulous. The cabin is studded with premium soft-touch materials. XE will come with more utility than before, expect improved cargo space and interior room for rear passengers.

The British carmaker is taking an approach similar to its all-electric SUV - Jaguar I-Pace. 2019 Jaguar XE will sport a dual screen central console. The new XE sedan comes with a 12.3-inch all-digital instrument cluster. There is a dedicated 10-inch touchscreen for infotainment and a second screen for operating the climate control. Other than the big infotainment system, the cabin layout of the XE facelift will follow the footsteps of the pre-facelift model.

Jaguar XE will also come with a newly introduced gearshift lever and steering wheel. The steering wheel is slimmer and gets brushed metal finish to elevate the premium look.

Even the entry-level XE sedan will have a long list of features. XE sedan will come with standard six airbags, sunroof, ABS with EBD, dual zone climate control. 2019 Jaguar XE facelift introduces Clear Sight interior rear-view mirror (a segment first feature). This feature debuted on the second-gen Evoque. The system features a camera integrated into the shark fin antenna. Live feed from the camera is sent to the IRVM. The camera helps to increase the field of vision by 50 degrees.

The Jaguar XE facelift will carry forward the same set of petrol engine and diesel engines that power the outgoing model. Jaguar XE configurations include a variety of engine options. The 2.0-liter diesel engine makes 180PS and 430Nm of torque. Depending on your choice, the 2.0-liter petrol engine can be had in two different states of tune. In the P200, the engine belts out 200PS/320Nm and in the P300, it produces 300PS/400Nm. All the engine options are only available with an 8-speed ZF automatic transmission.

However, the Indian spec of XE sedan might not be available with the P300 tune and the 4WD option. We will get the lower-tune (200PS/320Nm) of the 2.0-liter petrol engine.

Bookings are open for the 2019 Jaguar XE sedan in its home market - UK and Jaguar is expected to introduce the model in India by the end of 2019. The Jaguar XE sedan will compete against the likes of BMW 3 Series, Mercedes-Benz C Class, and the Volvo S60.