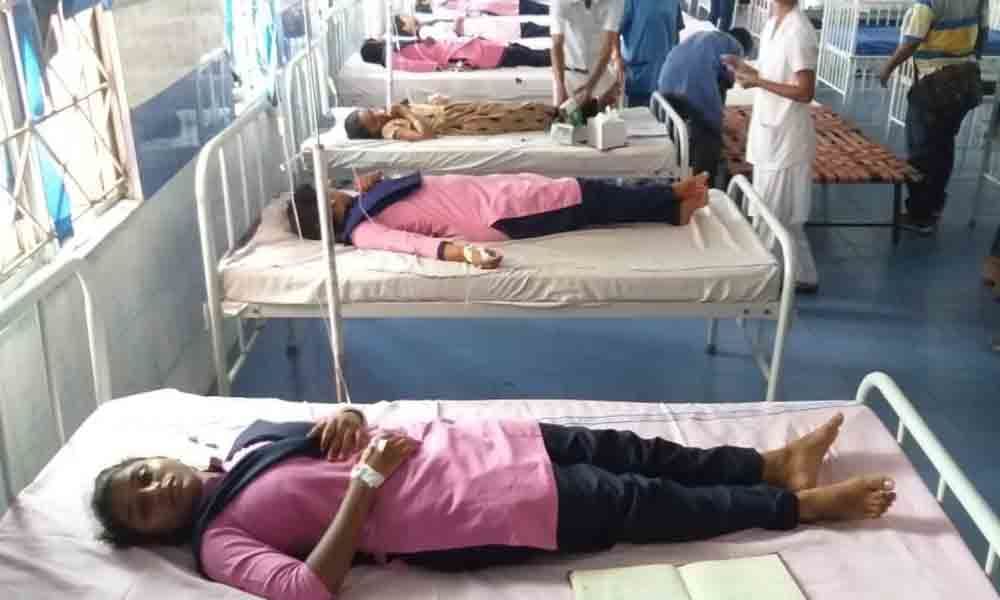 x
Students, who fell sick after consuming food, taking treatment in a government hospital in Huzurabad on Tuesday
Highlights

As many as 36 students of Telangana State Model School of Keshavapatnam on Tuesday fell ill after consuming poisonous food.

Keshavapatnam: As many as 36 students of Telangana State Model School of Keshavapatnam on Tuesday fell ill after consuming poisonous food.

According to Assistant Sub-Inspector of Police Satyanarayana, three students, who consumed food on Monday night, fell ill and were shifted to local hospital for treatment. Again, on Tuesday morning, about 36 students of the school complained of suffering with severe stomach pain after consuming breakfast. The students, who fell sick, are studying Intermediate first and second year.

After knowing the students' condition, warden Jyothi and others shifted some of the students to Huzurabad government hospital and others to Karimnagar main hospital for treatment in 108 ambulance.

District Medical and Health Officer Rammohan Rao along with Deputy DM&HO Rajamouli and Tahsildar Vijaya Lalitha visited the hospitals and consoled the students. They assured the students that stringent action will be taken against persons responsible for this and will take precautionary steps to prevent such type of incidents from repeating. Students Srija, Aksha, Gayatri, Sri Krishna, Saraswathi, CH Akhila, A Swetha, J Samatha, Nayeeni Sindhu, Pachhimatala Manisha, K Shirisha, U Pujitha, S Akshitha and Belli Sathwika are among those, who fell sick along with others.