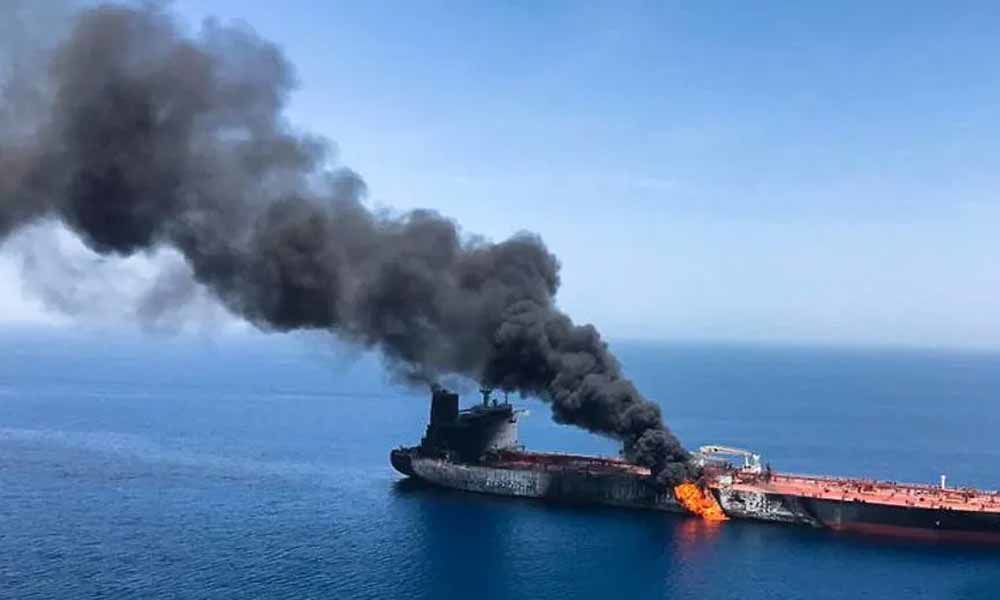 If, despite its firm denials, Iran was behind attacks on two oil tankers in the Gulf last week and a further four last month, they represent a calibrated yet risky pushback against a U.S. sanctions squeeze, regional experts say.

GENEVA: If, despite its firm denials, Iran was behind attacks on two oil tankers in the Gulf last week and a further four last month, they represent a calibrated yet risky pushback against a U.S. sanctions squeeze, regional experts say.

The targeting of six vessels on a major artery for world oil supplies was a vivid reminder of the stakes involved in the standoff pitting Iran against the United States and its regional allies.

The latest two attacks, on Thursday, were much more complex than last month's because the tankers were moving rather than at anchor as previously, said Hossein Aryan, a military analyst who served 18 years in Iran's navy before and after the 1979 Islamic revolution.

Two government security sources, one American and one European, also noted the sophistication of the attacks, which damaged the tankers without seriously injuring anyone. They told reporters this indicated deliberate calculation.

The two sources, who declined to be named, said the attacks appeared designed to show that Iran could create chaos if it wanted to but at this point did not want to, perhaps in the hope of persuading the United States and other antagonists to back off rather than trigger conflict.

They did not provide direct evidence of Iranian involvement, but the United States and Saudi Arabia have blamed Iran publicly for both sets of attacks.

Whereas some U.S. sources said they believed Iran encouraged allied militants or militia to carry out last month's attacks, the U.S. military has released a video and still images which it says show Iran's Revolutionary Guards removing an unexploded limpet mine from one of the latest vessels to be targeted.

Tehran expressed concern over the May attacks and said the footage released after the latest ones by the United States military proved nothing and Iran was being made a scapegoat.

Germany said last week the video was not enough to apportion blame, while Britain said no other state or non-state actor could have been responsible. U.N. Secretary General Antonio Guterres called for an independent investigation.

The head of the company which owns the Japanese tanker hit said last week its crew had reported flying objects damaged the ship, but Aryan said whoever attacked it and a Norwegian tanker had attached magnetic limpet mines with a timer when they were anchored or using a boat or marine drone when they were moving.

Iran's military said on Monday that if it decided to block the Strait of Hormuz, a vital gateway in the Gulf for the oil industry, it would do so publicly, and both Supreme Leader Ayatollah Ali Khamenei and President Hassan Rouhani have said Iran does not want war.

Tehran has been at pains to underline its capabilities, however.

"If attacked, we can make the maritime regions unsafe for the aggressors," said an Iranian official who spoke on condition of anonymity due to the sensitivity of the situation.

Ali Vaez, director of the Iran Project at the Crisis Group think-tank, and other regional sources said that if Iran was responsible, it was clearly trying to show it could threaten global oil supply with a view to deterring the U.S. and its allies from further ratcheting up the pressure.

Saudi Arabia, the Emirates and other regional rivals are backing U.S. efforts to cut off Iran's oil exports with pledges to boost their own oil production to keep prices stable. But a fifth of the world's oil passes through the Gulf of Oman and the attacks hit vessels on both sides of the waterway.

"The message being sent by Iran is that we can disrupt operations on east and west. If they can't export, no one should," said a Gulf industry source who asked not to be identified.

Washington then sent an aircraft carrier, B-52 bombers and Patriot missiles to the region last month in a show of force against what U.S. officials say are Iranian threats to its troops and interests there.

Acting U.S. Defense Secretary Patrick Shanahan announced on Monday the deployment of about 1,000 more troops to the Middle East for what he said were defensive purposes, citing concerns about a threat from Iran.

Vaez said Tehran did not appear to have been cowed so far.

"The irony is that the U.S. maximum pressure strategy was supposed to temper Iranian behaviour," he said. "In practice, however, it has clearly backfired."

Iran could use relatively inexpensive asymmetric attacks to inflict costly damage, according to Tom Sharpe, a former commander in Britain's Royal Navy who is now a communications consultant.

"They have jet skis and fast boats that are trained for swarm attacks and just one £1,000 jet ski could disable a £1 billion warship," he told Reuters.

Sharpe said the United States and Western allies were prepared to tackle such attacks.

But the ability of Iran-linked groups to strike goes beyond the Strait of Hormuz.

In the same week that the four oil tankers were attacked off the coast of the Emirates last month, Yemen's Iran-aligned Houthis struck two oil pumping stations within Saudi Arabia with armed drones.

A few days later, a rocket was fired near the U.S. embassy in Baghdad, which had already evacuated non-emergency staff a week after U.S. Secretary of State Mike Pompeo made a surprise trip to Baghdad to talk to Iraqi officials about U.S. concerns of threats from Iran-backed militias.

During the Iran-Iraq war in the 1980s, both Iran and Iraq attacked tankers and merchant ships in the Gulf, which drew the United States into the conflict.

Iran learned lessons from that period, which became known as the "Tanker War," and now has many more tools at its disposal, such as mines and speed boats, to use in asymmetric warfare to send a signal, Aryan said.

"That signal is to show to the Arab states and to the United States that, despite all their military might and presence in the region, the lines of communication in the region are vulnerable, to show that vulnerability."

The danger for Iran, if it is pursuing that strategy, is that a small incident could quickly escalate, observers say.

"This is an extremely risky strategy," said Ali Alfoneh, senior fellow at the Arab Gulf States Institute in Washington. "The gamble of Islamic Republic strategists ... may end up provoking a war Iran can ill afford."