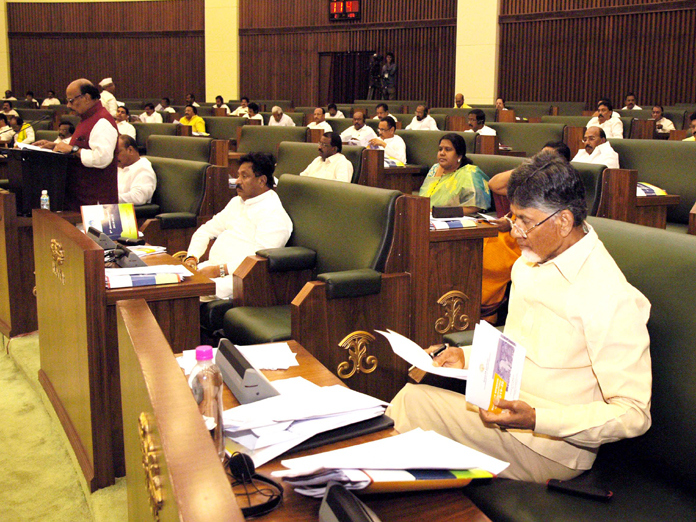 With an eye on the ensuing general elections, the Andhra Pradesh government on Tuesday presented a voteonaccount budget with a proposed expenditure of Rs 2,26,178 crore for the financial year 201920 This is about 1838 per cent over the revised estimates of 201819 financial year

Amaravati: With an eye on the ensuing general elections, the Andhra Pradesh government on Tuesday presented a vote-on-account budget with a proposed expenditure of Rs 2,26,178 crore for the financial year 2019-20. This is about 18.38 per cent over the revised estimates of 2018-19 financial year.

The highlight of this budget is that the government despite having announced several new schemes and increased allocations, projected a revenue deficit of Rs 2,099.47 crore. According to the proposals presented to the Assembly by Finance Minister Y Ramakrishnudu, the estimated revenue expenditure is Rs 1,80,369.33 crore and capital expenditure is estimated to be around Rs 29,596.53 crore.

The Finance Minister said the state’s own tax revenue is pegged at Rs 75,438 crore. Salaries and pensions form major head account of account under revenue expenditure.

Indicating that the government was giving high priority to agriculture, it has launched a new scheme called ‘Annadata Sukhibhava’ a direct transfer scheme for the benefit of farmers. A sum of Rs 5,000 crore has been allocated for the scheme.

The government also announced the cash transfer scheme for self-help groups and allocated Rs 6,400 crore for giving Rs 10,000 to each of the nine million women members under Pasupu Kumkuma programme which was recently launched by the Chief Minister. The government has also decided to double the benefit under the scheme to the unemployed youth from present Rs 1,000 to Rs 2,000 per month and it has allocated Rs 1,200 crore for the same.

The Finance Minister also earmarked Rs 500 crore for land acquisition for housesites and Rs 400 crore for promotion of micro small and medium enterprises. The budget proposals also contain an allocation of Rs 150 crore for proposed Drivers’ Sadhikara Samstha, Rs 100 crore for creation of infrastructure investment scheme and Rs 50 crore for the welfare of Kshatriyas.

Following the recent announcement made by the chief minister that all federations will be converted into corporations, Ramakrishnudu said the government proposes to allocate Rs 12,819 crore for social security pensions, Rs 3000 crore for BC Welfare Corporation, Rs 1000 crore for Kapu corporation and Rs 100 crore for Brahmin welfare and Rs 50 crore for Vysya corporation.

Quoting American author William Arthur, the Finance Minister said, “Adversity causes some men to break; others to break records.” “Five years back when the state was bifurcated, no one expected that the state would progress at this pace on all fronts under the leadership of Chief Minister N Chandrababu Naidu.

People were not even sure if the government would be able to pay salaries in time. But now the state of Andhra Pradesh despite not getting the support it should have from the Centre had made great strides and is in midst of developing a world class capital city,” he said.

On the development of Amaravati as capital city, the FM said that Rs 1,09,023 crore has been earmarked for the construction and of that works worth Rs 39,875 were in progress.