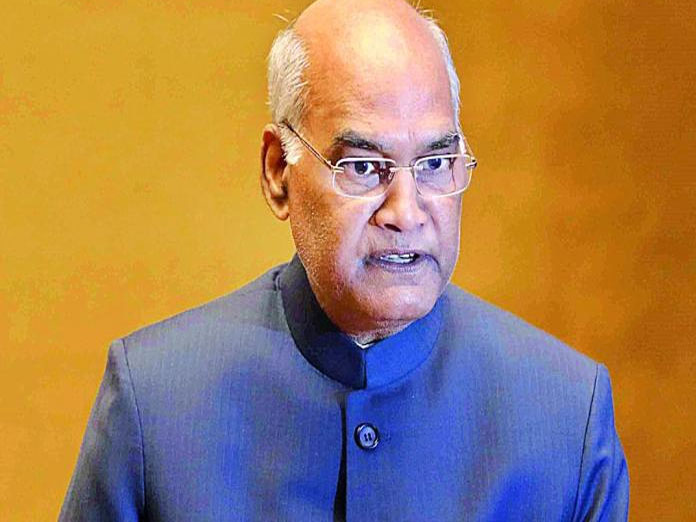 Country's GDP has been growing at a rate of 7.3 pc on an average, making India the sixth largest economy in the world.

New Delhi: President Ram Nath Kovind on Thursday said India's contribution to global economy has increased from 2.6 per cent in 2014 to 3.3 per cent in 2017 on the back of high growth rate during the last four and a half years.

Addressing the joint sitting of the Parliament, he said the country's GDP has been growing at a rate of 7.3 per cent on an average, making India the sixth largest economy in the world.

"India is playing a significant role in international trade. While India's contribution to the world GDP was 2.6 per cent in 2014, it has increased to 3.3 per cent in 2017 as per the latest reports," Kovind said.

The President noted that this is an opportune moment for the country to play a decisive role in the fourth industrial revolution. Kovind further said that prior to the 2014 general election, the country was passing through a phase of uncertainty.

"After the elections, my Government assumed charge and vowed to build a new India. "...in the last four and a half years, my Government has infused new hope and confidence among the people of the country, enhanced the country's image and has effectively brought in social and economic change," he said.

From day one, Kovind said the mission of Modi government based on transparency was to improve the lives of Indian citizens, to eradicate their difficulties owing to poor governance, and to make sure that the benefit of public services reach the lowest strata of the society.

"The main goal of my government is to improve the life of every Indian," he insisted.

The President said in order to simplify the processes, the Modi government has started a scheme wherein loans of amounts up to Rs 1 crore are approved within 59 minutes.

Citing data from an international agency, he said of all the bank accounts opened in the world from 2014 to 2017, 55 per cent were opened in India alone.

"As a result of the expansion in direct benefit transfer (DBT) in the last four and a half years, more than Rs 6,05,000 crore have been directly transferred to the bank accounts of beneficiaries," Kovind said adding that because of this about Rs 1,10,000 crore have been saved from falling into wrong hands.

The President said, 34 crore bank accounts have been opened in the country under the 'Jan Dhan Yojana' and almost every family is now connected to the banking system.

Noting that developing modern infrastructure for economic development as per the needs of 21st century is the aspiration of every Indian, he said, "sensitive to their aspirations, my government is completing new projects at a fast pace."