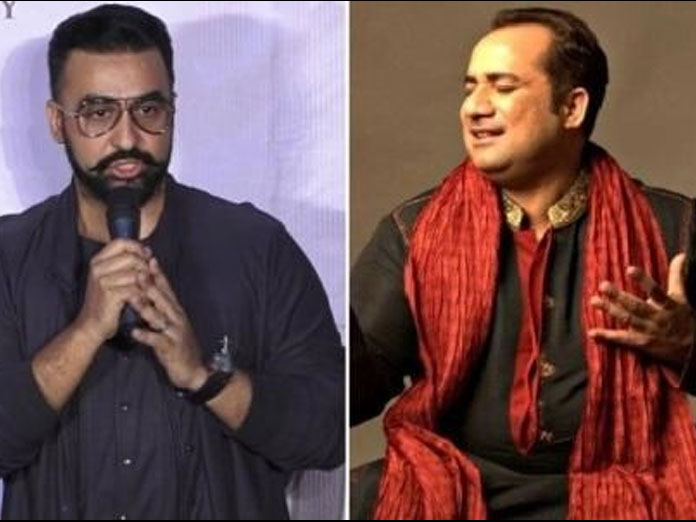 Amidst of protest against Pakistani actors and singers being banned in industry, an entrepreneur turned director Raj Kundra attracted a lot of heat for creating a music video of a famous song by Rahat Fateh Ali Khan, who is under ED investigation

Amidst of protest against Pakistani actors and singers being banned in industry, an entrepreneur turned director Raj Kundra attracted a lot of heat for creating a music video of a famous song by Rahat Fateh Ali Khan, who is under ED investigation.

During the song launch Raj Kundra was asked about taking a Pakistani singer song for his directorial debut, he said, “Industry is saying that a Pakistani singer and actor cannot act in the country. So following the laws of the land, we obviously followed that even right now all the Rahat Fateh Ali Khan’s song which comes into the industry, are shot overseas. In this video, there is no Rahat ji, but his voice and I don’t think there is any law against the voice, that we cannot listen to it”

Further Raj Kundra added that his music label aims to promote all sorts of genre and singers. He said, “We are a music label, we are doing non-filmy and independent music, first song was with Gaurav Roshan, titled Get Dirty with Esha Gupta, second song was with Abeer Arora called Rambo, a hip hop song and this one is more Sufi and romantic song and we will keep bringing different genres in our label, and that is the idea, to keep promoting more talent and great non-film music”

Raj Kundra also praised his co-director Robin Behl for being the pillar of support. He said, “I am not going to take any credit for this video because it is very easy to write a script on paper but for it to become a reality you really need to be technical savvy, that is where my co-director Robin came in because without him I wasn’t been able to direct this video and probably wouldn’t have directed it”