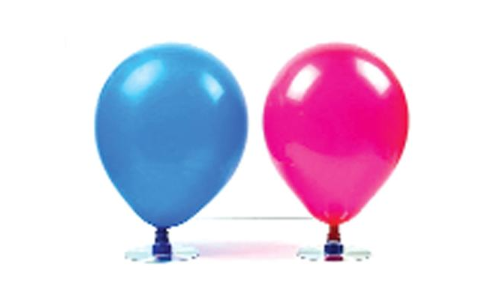 Try this very simple project to create a floating disc that skims across a surface similar to the way an air hockey puck or hovercraft does What You Need Blank CD or CD you dont want any more, Poptop cap from a water bottle or dish soap bottle, Balloon, Hot glue gun

Try this very simple project to create a floating disc that skims across a surface similar to the way an air hockey puck or hovercraft does. What You Need: Blank CD or CD you don’t want any more, Pop-top cap from a water bottle or dish soap bottle, Balloon, Hot glue gun

What You Do Use the hot glue gun to carefully glue the bottle cap over the center hole of the CD and let it set. Make sure the edges are fully sealed. Push the pop-top cap closed. Blow up the balloon, then hold it so that no air escapes, but don’t tie it off. Stretch the mouth of the balloon over the bottle cap (you may need an assistant to help you do this so that you don’t lose any air from the balloon). Now adjust the balloon so that it stands up straight and centered.

Set the hovercraft on a hard, smooth table and open the pop-top; then nudge the device along and see what happens.
What Happened: A hovercraft works by forcing air out beneath it, creating a cushion of air to float on. Hovercrafts usually have a “skirt” that surrounds the base to contain the air; in this project the CD is light enough that it doesn’t need a large cushion, so no skirt is necessary. The balloon acts as a pressurized gas chamber. When you open the cap, the balloon forces air out through the cap, creating a thin cushion of air beneath the CD.

As you nudged your hovercraft around, you may have noticed that it zipped along the surface like an air hockey puck. That’s because air hockey uses the same principle, with the puck floating on a layer of air. In the case of an air hockey table, the air is forced out from the table below rather than a source above like a hovercraft.

Try pushing a plain CD across the table, and then your hovercraft. Do the two move differently? That’s because the thin cushion of air from the hovercraft reduces the friction between the CD and the table.