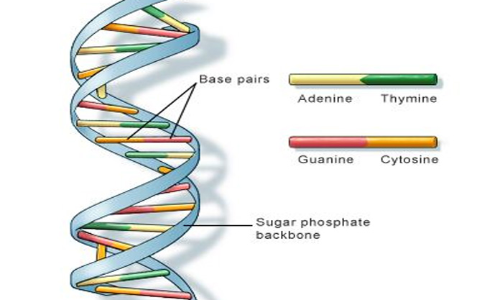 Deoxyribo Nucleic Acid (DNA) is a chemical found in the nucleus of cells and carries the ‘instructions’ for the development and functioning of living organisms. It is often compared to a set of blueprints since it contains the instructions needed to build cells. These instructions are divided into segments along a strand of DNA and are called genes. Genes are a DNA sequence that code for the production of a protein and control hereditary characteristics such as eye color or personality behaviors.

Proteins determine the type and function of a cell, so a cell knows whether it is a skin cell, a blood cell, a bone cell, etc, and how to perform its appropriate tasks. Other DNA sequences are responsible for structural purposes or are involved in the regulation and use of genetic information.

Structure of DNA: He structure of DNA can be compared to a ladder. It has an alternating chemical phosphate and sugar backbone, making the ‘sides’ of the ladder. (Deoxyribose is the name of the sugar found in the backbone of DNA.) In between the two sides of this sugar-phosphate backbone are four nitrogenous bases: adenine (A), thymine (T), cytosine (C), and guanine (G). (A grouping like this of a phosphate, a sugar, and a base makes up a subunit of DNA called a nucleotide.) These bases make up the ‘rungs’ of the ladder, and are attached to the backbone where the deoxyribose (sugar) molecules are located.

The chemical bases are connected to each other by hydrogen bonds, but the bases can only connect to a specific base partner – adenine and thymine connect to each other and cytosine and guanine connect to each other. The arrangement of these bases is very important as this determines what the organism will be – a plant, an animal, or a fungus. This is called genetic coding. For example, one side of DNA could have the genetic code of AAATTTCCCGGGATC. Its complementary side would then have to be TTTAAAGGGCCCTAG.

Even though the shape of DNA is often described as a ladder, it is not a straight ladder. It is twisted to the right, making the shape of the DNA molecule a right-handed double helix. This shape allows for a large amount of genetic information to be ‘stuffed’ into a very small space. In fact, if you lined up each molecule of DNA in one cell end to end, the strand would be six feet in length.

DNA Replicates Itself: Before a cell can divide and make a new cell, it must first duplicate its DNA. This process is called DNA replication. When it is time to replicate, the hydrogen bonds holding the base pairs together break, allowing the two DNA strands to unwind and separate. The specific base pairing provides a way for DNA to make exact copies of itself. Each half of the original DNA still has a base attached to its sugar-phosphate backbone.

A new strand of DNA is made by an enzyme called DNA polymerase. It reads the original strand and matches complementary bases to the original strand. (The sugar-phosphate backbone comes with the new bases.) New strands attach to both sides of the original DNA, making two identical DNA double helices composed of one original and one new strand.