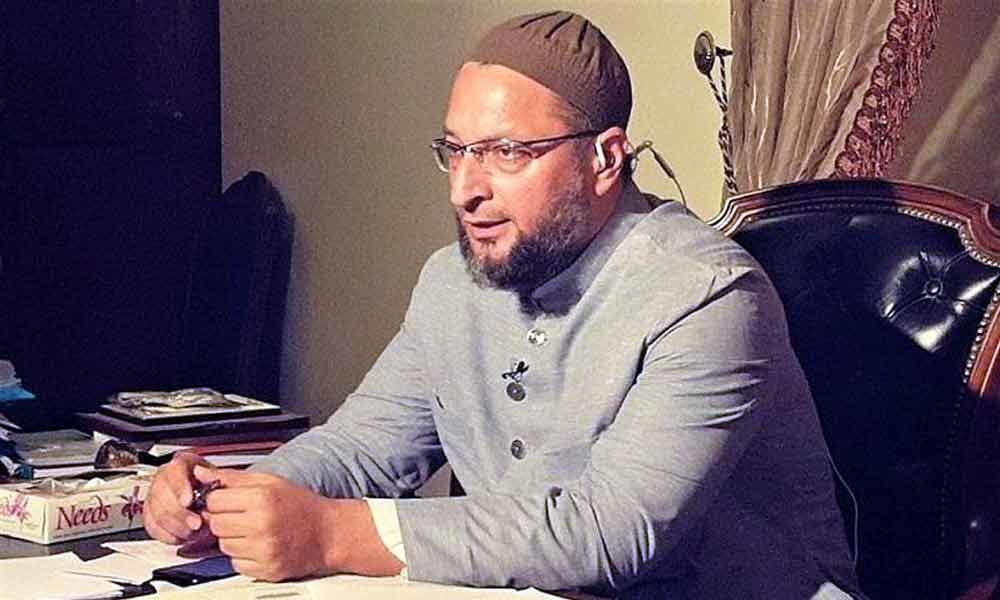 All India Majlis-e-Ittehadul Muslimeen Supremo Barrister Asaduddin Owaisi alleged that Prime Minister Narendra Modi has failed on all fronts and forecasted that a wave of change is going through the country.

Hyderabad: All India Majlis-e-Ittehadul Muslimeen Supremo Barrister Asaduddin Owaisi alleged that Prime Minister Narendra Modi has failed on all fronts and forecasted that a wave of change is going through the country.

Addressing a Meet the Press program organized by the Telangana Urdu Working Journalists' Federation, in collaboration with Indian News Network (INN), here on Tuesday, Owaisi said that after May 23rd, a non-Congress and non-BJP Government will come to power and the hopes and aspiration of people of this great country will be fulfilled. Speaking on wide range of subjects, Owaisi said that the just released BJP Manifesto has an error regarding safety of women, which shows the real mindset of the saffron party. He said that BJP cannot safeguard women during last five a lot of incidents took place, in which women's were raped, molested including minors. Regarding the contentious Kashmir issue he said that BJP has no clear cut policy on Kashmir, while they were enjoying power for five years, they never thought of removing Article 370 and 35 (A). Now, to en cash the Parliamentary Elections 2019 they have again brought up these issues, he said.

The BJP leadership knows that Article 370 cannot be scraped it is the bridge between India and Kashmir, these Article 370 was drafted in the presence of great statesman Jawaharlal Nehru, Sardar Vallah Bhai Patel and BJP Ideologue Shyama Prasad Mukherjee. He further added that PM Modi and BJP Government should not forget that Nagaland and Mizoram are protect with Article 370, the Indian Government has signed, shared sovereignty treaty, they are deceiving Indians.

Regarding the implementation of Uniform Civil Code, Owaisi said that in India Uniform Civil Code cannot be implemented as the Law Commission is against this idea, because BJP cannot digests India's diversity they are trying to take up un-related issues, secondly the Hindu's have two thoughts, has the Government taken exercises to reconcile those thoughts. Then, how they are going to implement the Uniform Civil Code?

On, the Babri Masjid issue, Owaisi said that after demolition of the Masjid, no Government became the petitioner in the Court of Law, but for the first time, Government of Uttar Pradesh changed its stance and filed an affidavit in Apex Court asking to give the surplus land which shows that the Government has forgotten its constitutional duty.

Asaduddin Owaisi further said that PM Narendra Modi failed to deliver "Achhe Din" providing two crores of job was not kept, Demonetization failed, now they want to deceive the fellow countrymen which is an art of paper work.

On the issue of 12% reservation to Muslims in Telangana, Asaduddin Owaisi said that the State Government has sent and resolution passed in Legislative Assembly asking the Union Government to look into the matter. But, the centre till now has taken no decision which is intellectual dishonesty towards the State Government. When the State demands reservation on Social, Educational backwardness it is overlooked. But, an amendment is made in constitution to provide reservation on economic grounds which is un constitutional, it will be challenged.

Regarding All India Majlis-e-Ittehadul Muslimeen stand on Bihar and Uttar Pradesh General Elections, he said that AIMIM will not contest in Uttar Pradesh and the people will vote for Mahagat Bandan candidates, while we will contest the Kishangunj Parliament Segment in Seemanchal Bihar, he said that he wanted to see that BJP losing Bihar.

Asaduddin Owaisi said that India is very big and Modi is very small, India is composite culture is very big and the thoughts of the Modi are small, the Ethos of India are very big and Ideology of Modi is small. In this situation the people of the country should think that do Modi speaks for everyone, do Modi ideology is for every Indian. Do Modi thinks of poor and downtrodden? The answer is no. Modi never speaks for everyone and is limited to RSS ideology. He represents only rich and elite. Hence, the vote should be in the favour of those who think about the country, those who accept the spirit of constitution. In this scenario, the chances of a non-Congress and non-BJP Government formation are more and the new government will be not be of bits and pieces but it will be an organic government, where the idea of strong states and strong country will be promoted, he said.